Or just head over to the new site. 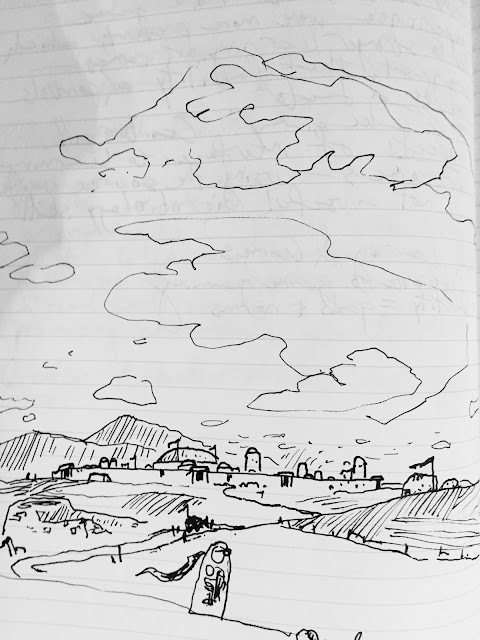 “It is a subject of some confoundment to foreigners that in addition to priests, the warbands of Bala-Basam often travel with philosophers. Really, the reasons are quite practical.

“At night, when the wind howls, and great black clouds make strange holes in the sky, even the bravest soldier cannot be blamed for wondering at her place in the Universe. In the day, when the wind screams against the steppe, and blows so hard that the horses are pushed off course, and the hills roll off forever, a soldier cannot be blamed for feeling a certain sense of futility. And marching among the gray peaks of the mountains, a soldier cannot be blamed if she is haunted by such stirrings for which God Herself has no name. Under such conditions, the counsel of a learned one who offers guidance is as fortifying as hot tea, and as comforting as a well-worn saddle. The Sage Ursanir wrote: ‘The priests are pragmatists; they are gifted in the rites and the treatment of sickness and injury, and guide well the actions of the body. But philosophers are physicians of the mind, and the priests, rigid of thought, cannot understand such miracles.’ Warlord Alssen sang: ‘I have won a hundred battles / My philosophers have won a thousand.’ This is why the warbands travel with philosophers.

“These same foreigners often remark, ‘ah, but if the philosophers are so virtuous, why is the school of Bala-Basam known to dabble in the Forbidden Arts?’ The reason for this too is quite simple.

“The school of Bala-Basam believes that freedom of thought is at the center of all good philosophy. And so its scholars dare to contemplate the most sinister counterfactuals. They rove in contradiction and dwell in paradox, and it is in these murky places that they unearth the rarest nuggets of Truth. But to find it they must shoulder the most dire and burdensome falsehoods.

“Of these falsehoods, the most terrible are the Sorceries, into which the unhappy student so often wanders. But we must not blame them for this fate. So said Warlord Kurun: ‘In a city where one is punished for the honest pursuit of Truth, there can be no justice.’ Indeed, no city is worth the ground it stands on, without its philosophers.”

The Wind in Bala-Basam
From Nola Nin's Travels

“I have noted how the Bala-Basamlur are superstitious. They ascribe to two things the utmost significance: Songs and the wind. I will expand a little upon this theme in the paragraphs below.

“Recall in the previous chapter my description of the Great Temple, its great, flat dome, its smooth, sandy walls, and the tiles that adorn its doors. Recall that the tiles form a scintillating pattern in white, blue, green, and gold, the skylike blue of the dome. Finally, recall the six minarets that surround the Temple, sunbaked white, each draped with great flags in yellow and pink that hang in the air like huge serpents.

“If it clarifies your imagining, also recall I mentioned the crispness of the air that cuts through the skin, even in full sunshine.

“Now imagine the Temple Hill, which sits in the shade of the dome. It is a white, empty place, where the sounds of the street give way to flapping of the great flags. Seven clay flutes stand on ivory poles here, all facing in different directions and rotated daily according to the phase of the moon. A priest, masked and dressed all in white, attends these flutes at all times, ready with a clay tablet and an awl.

“The flutes are so narrow they rarely sound, despite the winds blowing as they do. But when a note does sound, the priest quickly carves down a series of symbols. These, I understand, efficiently record many details, including tonality, frequency, duration, the weather, and some I have forgotten, or cannot translate in any way that makes sense. These carvings are believed to be very important augurs. They are scrutinized intensely and kept in an archive, to be consulted in times of crisis.

“I was allowed to visit the flutes on the Temple Hill under the auspices of the poet Rulam luVarssi. We had awful weather on that particular day. The clouds were heavy and nearly black. Not long after we got there a terrible gale whipped up, and the flutes began making such a cacophony. There were, at times, five or six sounding at once. The priest’s fingers went like a whirlwind. I will not describe the sound here, because it would be of no use.”
Posted by Alex Chalk at 3:09 PM 3 comments: